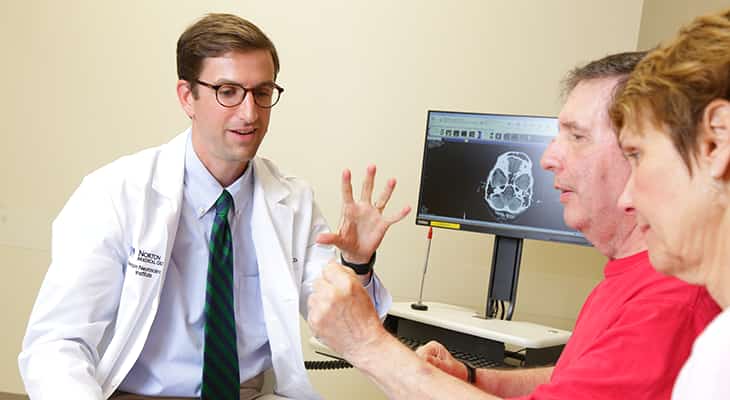 One of the newest neurologists on staff at the Norton Neuroscience Institute, Dr. Crowell grew up watching his grandfather, a lifelong physician, care for members of his small Alabama community. Dr Crowell saw with his own eyes, he said, “the relationships my grandfather established with his patients”.

When his grandfather was diagnosed with Parkinson’s disease, a nervous system disorder that affects movement and causes tremors, Dr. Crowell was already in school learning about the brain. He then decided to go into neurology.

“A lot of what I was hearing at the time came from my aunts and my grandmother,” Dr Crowell said. “It was sad in many ways because he had always been, in our family, the one who had all the medical answers. I just wanted to understand [Parkinson’s] better.”

Dr. Crowell completed medical school at the University of Alabama at Birmingham, where he then completed a fellowship in movement disorders after his residency at the University of Virginia in Charlottesville. He was particularly interested in deep brain stimulation, a procedure in which electrodes are implanted in the brain to combat the symptoms of Parkinson’s disease.

He also wanted to learn more about improving patient care and health care delivery, which led him to earn a master’s degree in public administration with a focus on health care policy from the prestigious Harvard Kennedy. School in Cambridge, Massachusetts.

All of this led Dr. Crowell to come to the intersection of medical and scientific curiosity and personal connection.

Norton Healthcare’s need for a second Parkinson’s disease specialist fulfilled Dr. Crowell’s desire to be closer to his family in Alabama and Tennessee and treat people with the kind of personal care his grandfather had. make proof. His schedule filled up more than two months before he even set foot in the office. Dr Crowell said his first few months “have been really rewarding, helping people faster”.

“I try very hard not to treat a lab finding or an exam finding, and rather treat the patient,” he said. “I can prescribe drugs or tests all day, but if I didn’t answer the patient’s questions, did I do something? I had a mentor who said, “It’s only a good pass if your teammate catches it.” Sometimes it’s just listening. People come to us with concerns; it is up to us to answer them and reassure them.