With roommates, it’s all about chemistry, molecularly speaking 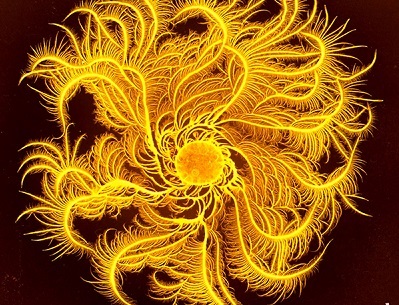 With roommates, it’s all about chemistry, molecularly speaking

Paenibacillus bacteria shown colonized in a petri dish. In the test house, the bacterial species was associated with coffee molecules and found where the coffee was brewed. Bacteria can have healthy properties. Credit: From Ben Jacob Lab

Within and on every human being reside countless microorganisms – the microbiota that help shape and direct the lives of their hosts. A similar phenomenon occurs between people, microbes and the homes they share.

write in Scientists progressscientists at the University of California, San Diego School of Medicine and elsewhere report the molecular impact of life indoors, describing how the presence of humans interacts with their microbial housemates, altering biology and house chemistry.

The findings, the authors suggest, should influence future building designs.

Modern Americans spend about 70% of their time indoors, reshaping the indoor microbiome with input from their bodies. Limited research has investigated the interaction between humans and indoor exposures to specific pollutants, toxins and particles, but the new study more ambitiously documents how people influence the overall molecular and chemical makeup of a home. through routine activities.

An experimental test house was erected in Austin, Texas during the summer of 2018. The house was designed for ordinary use and included bathrooms, kitchen, gathering and working areas. Overnight stays were prohibited, but 45 study participants, as well as visitors, spent time in the home, occupying it approximately six hours a day for 26 days, during which they performed scripted activities, such as cooking, cleaning and socializing.

The researchers sampled the distribution of molecules and detectable microbes in occupied areas of the home at the start of the experiment, dubbed T1, and again 28 days later, dubbed T2, largely by dabbing surfaces and performing various genomic, metabolic and chemical analyses.

Prior to T1, the house was deep cleaned with a bleach solution. Nevertheless, the researchers said traces of molecules associated with humans were still present. At T2, after almost a month of human occupancy, the house was alive with molecular and microbial abundance and diversity, albeit unevenly distributed.

Researchers have found molecules associated with skincare products, skin cells, drugs (like antidepressants and anabolic steroids), food-derived molecules (like terpenes and flavonoids), human or animal metabolites (molecules generated during the process of metabolism, such as bile and fatty acids), amino acids, sugars and microbial metabolites.

Unsurprisingly, the kitchen and restrooms were hotspots of molecular and microbial diversity, although numbers fluctuated with cleaning and sanitizing of surfaces. “It appears that even when a subset of chemicals is removed due to cleanup, it is only temporary and/or partial, as the sum total of cleanup and human activities overall results in increased accumulation of richer chemicals,” the authors explain. wrote.

Surfaces regularly touched by people, such as tables, switches and knobs, were more abundant in molecular and microbial chemistry. The floors showed less molecular diversity, possibly because they were mopped more often. Windows, chairs, and doors that are not routinely touched by human occupants showed the least change in chemical diversity between T1 and T2.

Of course, people weren’t the only occupants of the test house. The researchers discovered interior surfaces covered in bacteria, fungi and other microbes, as well as their metabolites. Regular cleaning changed these microbial populations and their diversity over time, allowing different species to recolonize the cleaned spaces.

At the end of the test period, less than half of the home’s original microbiome remained, but it accounted for more than 96% of all microbial life counted. Most of the microbiome detected at T2 came from human occupants, primarily commensal species that reside on human skin or in the gut. Free-living microbes associated with the environment have been decimated by human activities. In other words, cleansed or expelled.

“We don’t know exactly how human-related microbes eliminated environmental microbes because it could happen in many ways, but it’s clear they do,” said Rob Knight, one of the leading study researchers and director of the Center. for Microbiome Innovation at UC San Diego. “Understanding this phenomenon will be a key goal of future research on the microbiology of the built environment.”

The authors noted that at least 1% of the molecules detected inside can have an outsized effect on health. For example, bacterial species Paenibacillus was associated with coffee molecules, one of the main sources of indoor foodborne molecules detected. At home, especially in T2, Paenibacillus has been observed in and around the area where the coffee was made and the genus has been found to grow in coffee machines. Paenibacillus have been used as probiotics in chickens and bees, and may also aid human health, consistent with recent reports that coffee consumption is associated with improved cardiovascular health and longevity.

“Understanding specifically how our observations that human and microbial occupants alter the chemical composition of a home should influence the design of building materials to improve human health will require further study,” said co-lead researcher Pieter Dorrestein, Director of Collaborative Mass Spectrometry. Center for Innovation at the Skaggs School of Pharmacy and Pharmaceutical Sciences at UC San Diego.

Republished with kind permission from UCSD.